Vince Knight is a lecturer at the School of Mathematics at Cardiff University. Vince’s research interests lie in the intersection of queueing theory and game theory and he enjoys understanding how individual behaviour affects queueing situations. Vince lives in Cardiff with his fiancée Zoë and their two cats: Chick and Duck.

In my life I have been lucky enough to have various mentors: my parents, my high school teachers and rugby coaches, and currently my head of research group at Cardiff University. The subject of this blog is one particular mentor: my high school physics teacher.

I am what is called a third culture kid (TCK), which simply means that I’m utterly confused as to where I’m from. I always feel very lucky that my parents travelled a lot, giving me the opportunity to experience growing up in a variety of cultures. Both my parents are strong believers in the importance of academic performance (as am I). Growing up and going to school in South Africa, the US, and being home schooled, I began my academic life as a good student. At one point we moved to Guadeloupe in the French West Indies. During my first two years of high school I continued to perform well academically, particularly in mathematics. Math was never an effort for me during those days; it was just fun.

Around about the age of 13, I stopped excelling in class. Perhaps it was hormones making me reassess my priorities, perhaps I just wanted to be cool, but for whatever reason, I became a mediocre student.

My parents wouldn’t need much encouragement to confirm that during those years of my life (13 to 15 years old) I was not the easiest person to get along with. My marks went down and in fact my mother has since told me that she was worried I was on drugs (in fact I wasn’t – I was just having fun and nothing else was important). Here’s a photo of my report card (from the second term in 1998-1999): 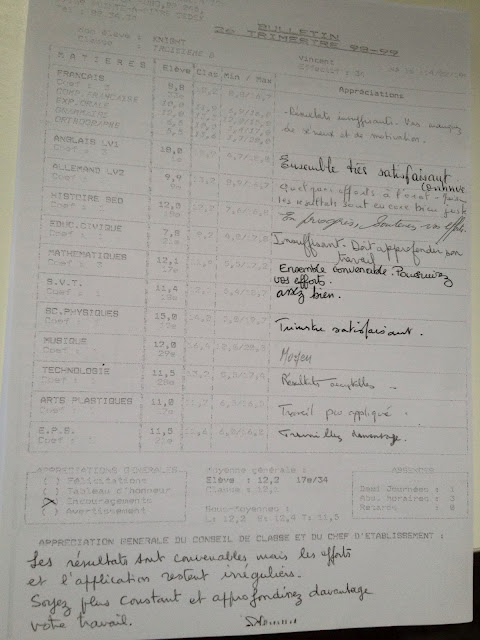 “Results are sufficient but efforts are sporadic. Be regular and work harder.”

This further translates as “You’re lazy”.

Then I got to the French class of ‘Seconde’ (1999-2000), the first year in the 3 year run-up to preparation for the baccalaureate (the final exam before tertiary education).

At this point in my life I was happy; I had a nice girlfriend, I was popular in school, I captained the Guadeloupe rugby team (for my age group) and I was more or less content playing video games and hanging out with my friends.

This was when Melle Tayrac came into my life: the physics teacher I was lucky enough to have in ‘Seconde’. She had a reputation for being extremely strict and was rather intimidating in the dark glasses she always wore. For some reason I liked her strict-no-nonsense approach. She expected people to succeed. She would literally drag students to success through hard graft. This didn’t work with all her students, but it worked with me.

In my first term I got satisfactory results. Then in my second term, I began to notice that if I worked hard I would get good marks. The feeling of being rewarded for effort made me begin to really enjoy revising. Melle Tayrac recognised hard work, not through praise and encouragement but often by pushing me harder in the various lab sessions we had. She wasn’t necessarily ‘nice to me’ (although at one point she did let a smile slip) but I didn’t really care and/or need her to be. I understood that her hard demeanour and high expectations were all with my interests at heart.

Two years earlier, I’d told my parents on many occasions, that the explanation for my low marks was perhaps that ‘I’m just not clever’. Melle Tayrac showed me, by not accepting laziness that this wasn’t the case. I’m not saying that I’m any smarter than anyone else; I’m saying that the reason for my poor academic performance was not a reflection of my ability, but a reflection of my laziness. Understanding this changed my life. I believe that since my time with Melle Tayrac I have never failed because of lack of effort. I don’t mind not succeeding if others are better than I am, but I will never fail because of lack of effort. This, I owe to Melle Tayrac.

My third term came by and I was now working hard in all my subjects. I actually began to enjoy mathematics more than anything else and ranked top of my year in the subject. As a result of my marks and my newly-found willingness to push myself, I ended up going to a boarding school in Jura where I had a heavy dose of rugby added to my academic studies.

Here’s a plot of my overall marks, as well as mathematics and physics. 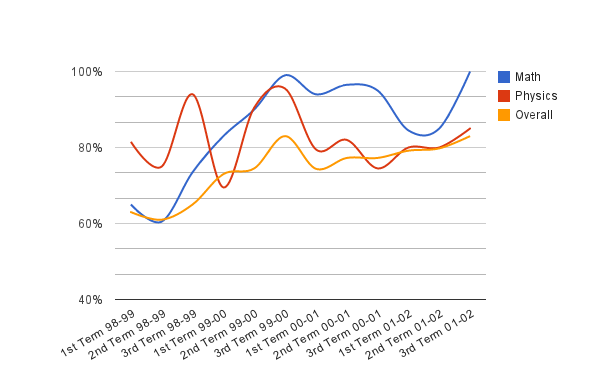 You can clearly see that they started going up when Melle Tayrac came into the picture (1st term in 1999-2000). The fact that my physics marks actually went down is simply due to the step up in difficulty as we started preparing for the baccalaureate.

Here’s a photo of one of my last high school report cards: 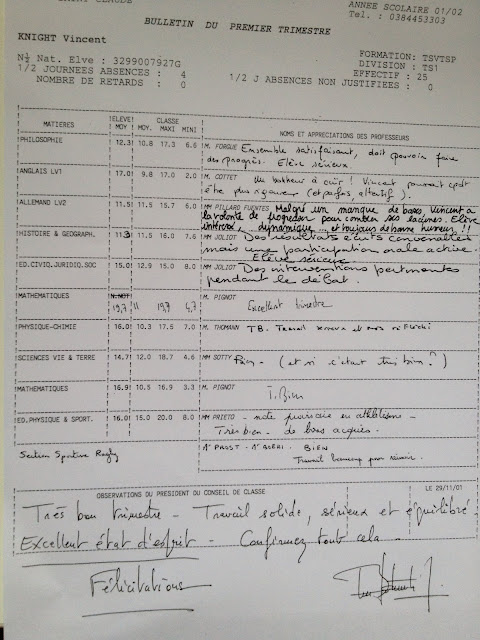 This further translates to “You’re not lazy anymore”.

I vaguely remember saying goodbye to Melle Tayrac. I seem to remember her saying that she’d miss me. I can’t remember what I said but it probably didn’t convey what I should have said. Quite possibly because I hadn’t realised how much she had affected my life.

Following my time in Jura, I ended up doing a mathematics degree at Cardiff University (graduating top of my year), staying at Cardiff to obtain my PhD and I am now a lecturer here.

I am proud of my academic achievements but am utterly convinced that my ‘ability’ has very little to do with any of them. I believe that all my achievements are the result of hard work inspired by Melle Tayrac. I’ve spoken to her only once since then and tried to convey the impact she had on my life, but I’m not sure she understood. What I do know is that without her guidance I would have had a very different life.

I will be forever thankful for her encouragement to work hard. Without Melle Tayrac I would not have fallen in love with the scientific thought process and the unmatched ability science has to reward hard work.