This is a guest post in our #NPGsfn11 blog series and posted on behalf of Bradley Voytek. 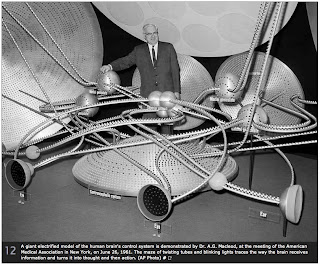 A giant electrified model of the human brain’s control system is demonstrated by Dr. A.G. Macleod, at the meeting of the American Medical Association in New York, on June 26, 1961. The maze of twisting tubes and blinking lights traces the way the brain receives information and turns it into thought and then action.

It’s a cheap journalistic trick to pull out a single example of hubris from the past at which to laugh and to highlight our own “progress”. But where did the Electric Brain fail? Claims to understanding or modeling the brain have almost certainly been made countless times over the course of human thinking…

Hell, in moments of excitement with colleagues over a pint (or two) I’ve been known to shout, “I’ve figured out the brain!” But, of course, I have always been wrong.

So here we are, exactly 50 years post Electric Brain, and I find myself once again at the annual Society for Neuroscience conference (SfN). Each year we push back the curtain of ignorance and, just as I have every year since I began my neuroscience career in 2003, I find myself surrounded by 30-40,000 fellow brain nerds.

How do the latest and greatest theories and findings on display at SfN compare to the Electric Brain? One would like to think that, with this much brain power (har, har), surely we must be close to “understanding the brain” (whatever that might mean.) Although any model of the human brain feels like an act of hubris, what good are countless scientific facts without an integrated model or framework in which to test them?

The Electric Brain is an example of a connectionist model in which the brain is composed of a collection of connected, communicating units. Thus, the brain can be modeled by the interconnections between all the subregions of it; behavior is thought to be an emergent property of the complexities of these interconnected networks of units.

A “unit” in the Electric Brain appears to be a whole region, whose computations are presumably modeled by a simple input/output function. The modern incarnations of this movement are seen in the rapidly maturing field with the sexy name of connectomics, the underlying belief of which is that if we could model how every neuron connects to every other neuron, we would understand the brain.

With advancements in computational power, we’ve moved beyond simplified models of entire brain regions and toward attempts to model whole neurons, such as this model of 10^11 neurons by Izhikevich and Edelman (Large-Scale Model of Mammalian Thalamocortical Systems, PNAS 2008).

But as Stephen Larson, a PhD candidate at UCSD astutely noted on Quora,

To give you a sense of the challenge here, consider the

case of a simple organism with 302 neurons, the C. elegans.

There has been a published connectome available since 1986… however,

behavior of the C. elegans.

One issue with this approach is that the brain is dynamic, and it is from this dynamism that behavior arises (and the complexities of which are hidden in a static wiring diagram). Wilder Penfield summed it up nicely, “Consciousness exists only in association with the passage of impulses through ever changing circuits of the brainstem and cortex. One cannot say that consciousness is here or there” (Wilder Penfield: his legacy to neurology. The centrencephalic system, Can Med Assoc J 1977).

In my most cynical moments, connectionist approaches feel like cargo cult thinking, whereby aping the general structure will give rise to the behavior of interest. But how can we learn anything without first understanding the neuroanatomy? After all, our anatomy determines the rules by which we are biologically constrained.

This year I spoke at the 3rd International Workshop on Advances in Electrocorticography. Across two days there were a total of 23 lectures on cutting-edge methods in human and animal electrophysiology. Last year I attended a day-long, pre-SfN workshop titled “Analysis and Function of Large-Scale Brain Networks”.

During both of these sessions I sometimes found it difficult to restrain my optimism and enthusiasm (yes, even after all these years “in the trenches”). And while wandering through a Kinko’s goldmine of posters and caffeinating myself through a series of lectures, occasionally I forget my skepticism and cynicism and think, “wow, they’re really on to something.”

And that’s what I love about this conference: every year it gives me a respite from cynicism and skepticism to see so many scientists who are so passionate about their work. Sure, it might be hubris to think that we can model a brain, but so what? When the models fail, scientists will learn, the field will iterate, and the process will advance.

That’s what we do, and that’s why I keep coming back. The Society for Neuroscience conference is my nerd Disneyland.

Brad received his PhD in neuroscience at the University of California, Berkeley in 2010 and has just begun his post-doctoral fellowship at UCSF. While his research focuses on the role of neuroplasticity in human cognition, he is more broadly interested in big data and data mining. He works with several San Francisco tech companies on behavioral and neuroscientific analytics. In 2006 he split the Time Person of the Year award.