The March for Science’s date has been set for April 22nd. Nicole Forrester speaks to scientists planning to take part.

It’s fair to say the scientific community is spending a lot of time talking about the March for Science, due to take place on April 22, 2017. While organizers are preparing for events in Washington, D.C. and satellite locations around the world, scientists are evaluating their roles in politics and public outreach. I reached out to scientists and science supporters to discuss the march and the impact of recent political decisions on science, scientific policy, and our careers as scientists.

According to their website, the March for Science was founded as “a celebration of our passion for science and a call to support and safeguard the scientific community.” For many scientists, though, it’s about supporting the scientific process itself and advocating for its importance. Joel Sachs, an Associate Professor of Biology at the University of California, Riverside, says, “Science is just a way of learning about the world and is incredibly important to make predictions about what’s going to happen in the future — in terms of our climate, disease, and how to manage crops and livestock. 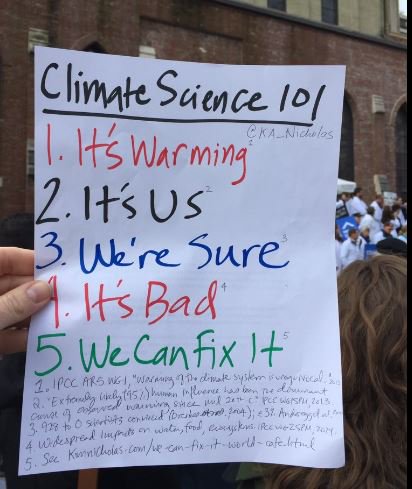 Since the results of the US election became clear on November 8, 2016, uncertainty and fear has resonated through the global scientific community. Many actions taken by the Trump administration over the past three weeks have amplified these concerns, resulting in a call to action among scientists and science supporters.

Funding freezes on government agencies raise concerns about financial support for research and future job opportunities in government and academia. Restrictions on communication between government scientists and the public limit transparency and the open exchange of ideas. The immigration ban may impede scientific research, restrict international collaborations, and reduce the number of scientists pursuing research opportunities in the United States. Science educators and outreach coordinators question how to ensure quality education and training for students in the face of an ‘alternative facts’ administration. Policies regarding climate change, protection of public lands and water, and reduced environmental regulations lead to doubts about the health and sustainability of society and our planet.

While the concerns are diverse, many planning to march share a common goal of advocating for the scientific process and the benefits it provides to society. Anna Johnson, an NSF postdoctoral fellow at the University of Pittsburgh, says, “during the campaign season, [politicians] never talked about science or climate change. Unless the public pushes for that type of discussion it’s not going to happen. Making a big, visible spectacle is how to get them to talk about it.” Many scientists I spoke to also believe the march will build links between scientists and the public.  Fundamental considerations regarding the scientific process itself have drawn others to action. “Science should be a democratic exercise where different people participate and review information based on evidence. It is a process that requires discussion and debate. And so if we don’t participate in a democracy and if we don’t sustain a democratic environment then we cannot do science,” says Maria Rebolleda-Gomez, a postdoctoral fellow at the University of Pittsburgh.

However, concerns have been raised about the potential negative impacts of the march. Robert Young, a professor at Western Carolina University, recently wrote that the march will politicize science and increase the divide between scientists and “a certain segment of the American electorate.” Instead, he supports localized efforts to increase public awareness of science. Others were worried that political involvement will negatively impact their careers, particularly while they are pursuing jobs in government and academia.

Now that an official date has been announced, scientists and supporters have started making plans to travel to Washington or participate in satellite marches. Sam Loftus, a high school biology teacher, and his wife, Amy, a graduate student studying climate change, are flying from their home in New Orleans to Pittsburgh and then driving to D.C. with fellow scientists. They will be joined by academic scientists from all career stages, disciplines, and universities. Other participants will include science educators, writers, and individuals that support science, the scientific community, and environmental protection.

While the March for Science has sparked debate about the best strategies for communicating science, it became clear to me that scientists are uniformly recognizing the importance of engaging with a broader, more diverse community. The main message being that the scientific process itself is not political, but rather a valuable approach to learning about the world. As Sachs says, “Scientists aren’t necessarily Democrats or Republicans, we’re just people trying to understand how the world works.”